The Birth of Chester Mills

Land in the area of today’s Upland was entirely taken up in the 1600’s by Swedes, and laid out in “plantations”. Swedes and Finns had settled on the west bank of the Delaware River as early as 1650.

The Swedes called this area "Opland" (Upland) because it closely resembled an area of that name in their homeland.

September, 1664 – English Colonel Nichols captured New Amsterdam, it became “ his majesty’s town of New York” . The Swedes decided it would be “Opland” (Upland) again.
Local Indians were of the semi-nomadic Lenni Lenape tribe – The Turtle Clan.
​ 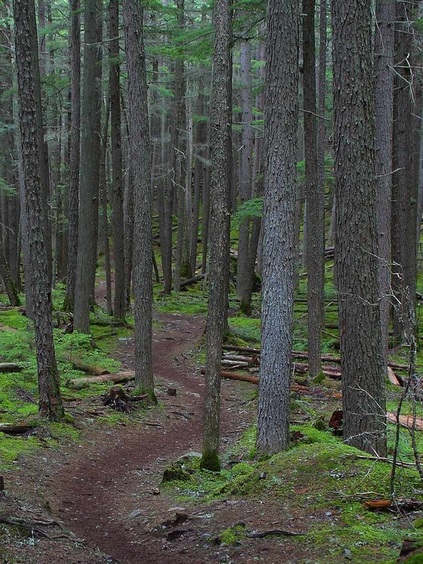 An old Indian trail ran from Darby along the general route of the present MacDade Blvd. into the Chester area, where it followed today’s 24th Street to the present Upland Avenue. Here it turned down the hill passing the current Kerlin Street and on to the area that is now Front Street where it turned right, following close to Chester Creek across the land which later would become Caleb Pusey’s plantation, and the site of the future Chester Mills, and then made a crossing to the higher land on the opposite side of the creek.
In his book on the indigenous peoples of this area, Dr. Paul Wallace, the Indian expert, sites this Indian trail; “The Indians could here cross over on stones and keep their moccasins dry”. The Indian name for the Chester Creek was “Meechaoppenachklan”, which meant. . . . Large potato stream or the stream along which large potatoes grow.​

​
​
​It must be said that William Penn, being a man who learned from the experiences of earlier English colonies, was intent on providing vital infrastructure for the settler/land owners in the new colony. Penn and nine partners organized to build one or more water mills to be erected in the province. Caleb Pusey received one share and is selected as the manager of the enterprise; the “Keeper of the Mill”.
Early deeds, which recited the setting up of the partnership (the Free Society of Traders) by twelve Friends in London, the whole divided into 32 shares, remained with the various owners of the Caleb Pusey House and Chester Mills until the time of the Crozers (circa 1845). (These deeds were copied and are on file in the Chester County Courthouse in West Chester, PA.)
​ 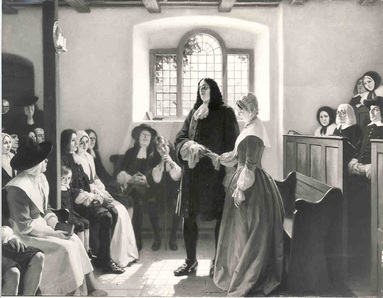 A typical Quaker Wedding (not Caleb/Anne)
1681 In London - Caleb Pusey signed himself as a Last Maker when he married the widow Ann Stone Worley at the London Friends meeting.

Caleb Pusey purchased 250 acres of land as one of William Penn’s 450 First Purchasers. 100 acres of this original purchase were laid out along the Chester Creek in present-day Upland.
​
1682 – Caleb Pusey, before leaving London, was entrusted with the responsibility of being the manager and agent of the grist and saw mills [the first proprietary mills in the new Pennsylvania]. For some time it was believed that Caleb Pusey may have come out ahead of the ship “Welcome” in order to select the site for the new mills and to arrange for their building. . . However, t​here is some confusion here, as a recent passenger list researched and developed by “The Welcome Society” includes Caleb Pusey and his family as passengers aboard the "Welcome".
​
Penn's ship “Welcome” was a wooden vessel; square rigged, 300 tons, about 150 feet long, high in the bow and higher still in the stern. Robert Greenway was the Master. There were 102 passengers aboard, and not all of Penn’s company could come as the passenger list was full. Others were compelled to wait for later boats, which numbered about 21 vessels in all.

The “Welcome” left Deal, England, September 1, 1682, and ended her voyage in 57 days, arriving in New Castle, DE on October 27, 1682. As other vessels normally made the crossing in one month. The “Welcome”, would have been considered a “dull boat” by mariners.
​
She likely would have done much better if not for having to lay over at “Little Egg Harbor”, New Jersey because of illness aboard. It should be noted here that one third of the original 102 souls were carried away (died) in an onboard epidemic of the Small-Pox. 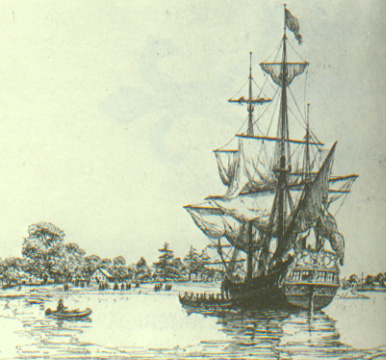 The colonists arrive in their new home.
October 28, 1682 – After a one day layover in New Castle town, the “Welcome” arrived in Upland (Opland) with William Penn aboard.

​Penn then, over the next days, changed the name of the area to Chester, likely with respect to the fact that most of the “Welcome” colonists were from Chestereshire (Cheshire) in England. William Penn also created Chester County and Chester Township at that time.
​
Caleb likely sought advice from Robert Wade, and other local English settlers then present, as to the best location for the new mills. Wade had lived in the area that was to become Chester for seven years, and although not a Quaker, was highly respected by William Penn.
​
Caleb named his 100 acre plantation “Landingford”. (Conjecture leads “us” to suggest that this name was developed from the fact that the location of the mill was to be at the point farthest upstream from the Delaware River that would allow navigation and the landing of a barge/craft.. . . . . also at the point nearest to the Delaware River where the creek could be Forded (crossed on foot), hence: Landingford.)
​Richard Townsend, an experienced Millwright and a passenger on the “Welcome”, was sent out by the stock company (The Free Society of Traders) to erect a mill “for grinding and the sawing of boards”, so that the early settlers would have lumber for their houses and flour for their tables. He was awarded two shares in the partnership. Townsend had built 1 or 2 mills for the partnership in London. The ship “Welcome” had brought the first mill “ready-framed” for erection as soon as possible upon arrival.

Townsend was also most likely instrumental in helping Caleb Pusey with the building of the east room of his house (1683).